Data has revealed that there are significant variations between the UK’s cities and towns when it comes to office workers returning and economic recovery. And business leaders are being advised to rethink the role of the office.

The Centre for Cities think tank, which uses anonymised mobile phone data to track footfall, found that smaller cities and towns such as Blackpool, Bournemouth, Southend, Portsmouth, Birkenhead and Chatham were leading the way with footfall recovery, whereas London, Birmingham and Manchester lagged furthest behind.

Footfall was most pronounced in seaside towns which received a surge in visitors from other parts of the UK during warm weather as quarantine measure put paid to holidays in southern Europe.

Spending recovery was also higher in towns than in large cities with Bournemouth, Burnley, Brighton, Gloucester and Middlesbrough leading the way and London again lagging.

The recovery of the towns and smaller cities was such that footfall was actually above pre-pandemic levels in 14 locations. For example, visitor numbers in Blackpool were at 141% of pre-crisis levels, but at the other end of the scale visits to London were at 31% of normal.

However, the onset of autumn may see a different picture emerge.

The figures, most recently updated on 1 September, taken together would indicate that the “office workers return” theme promoted by the government in recent weeks had not yet had an impact. According to the latest Office for National Statistics Coronavirus and Economic Impacts report, which covered 10-23 August, 36% of office workers were working remotely instead of at their normal place of work. In the previous period from 27 July to 9 August 39% were working remotely.

This week it was reported that US investment bank Goldman Sachs would bring back its 38,000 global staff part-time on a rota system. JP Morgan Chase announced similar plans earlier this month.

Such cautious return-to-office policies chime with comments by the Bank of England’s director of financial stability strategy, Alex Brazier, who said earlier this month: “I don’t think we can expect a sudden and sharp return of people to the very dense office environments that we were used to. We should expect a more phased return, depending on the public health outcomes we see in coming weeks and months.”

Professor Neil Ferguson, an epidemiologist from the MRC Centre for Global Infectious Disease Analysis, told Radio 4 this morning that there should be no headlong rush to get everybody back into the office and warned that Covid-19 infections were on the increase again with a rise in hospitalisations.

He said: “I’m still working from home, many people I know are still working from home and I think we should hesitate and maybe pause at the headlong rush to get everybody back into offices. But some people have to [go to] work and I completely understand the concerns in many quarters that everybody working at home has an economic impact, particularly on city centres.”

The debate over the timing of the return to the office should also include a discussion of what precisely offices are for, said Brian Kropp, chief of HR research at global advisory firm Gartner.

He told Personnel Today that Gartner’s research had “found that the traditional function of the office – the place where people gather to do work – doesn’t reflect the main function of an office today”.

He said: “The world’s biggest remote working experiment has revealed that in general, workers are just as productive working remotely as they are at home. As a result, many see a permanent shift to remote working as an opportunity to cut costs and reduce carbon footprint. For instance, Twitter recently announced that its employees will be able to work from home forever.

“However, there are other business leaders that are adamant that the office remains a critical part of an organisation’s success. They believe it is a fundamental part of the identity of the business – helping to build workplace culture, keep employees engaged, and support collaboration. 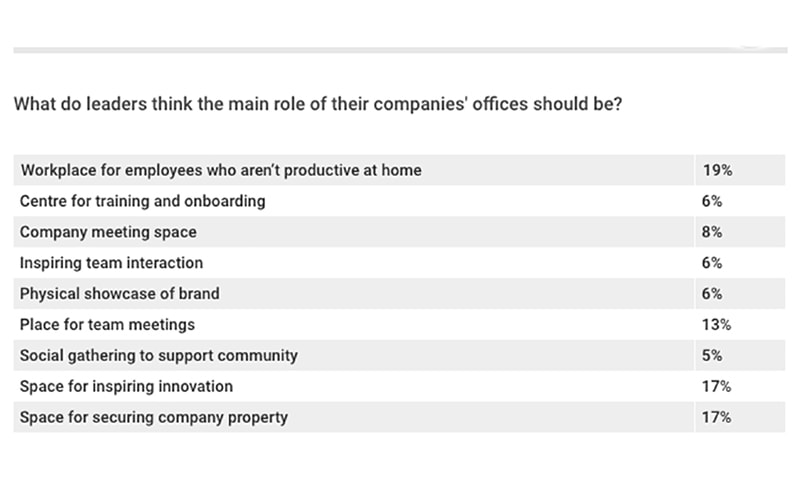 Kropp added that given the unique needs of every business, rather than simply reverting back to the way we used our office spaces pre-Covid, business leaders should be taking a step back and asking what do you want your workplace to help you achieve in the future?