Many people will be looking to the job markets in the New Year with a sense of trepidation.

The most recent official figures show vacancies down 31.5% on a year ago. With unemployment expected to keep rising as the coronavirus crisis, lockdowns and Brexit hobble much of the economy, the competition for many roles is likely to be fierce.

“It’s challenging out there for job-seekers at the moment — the UK is facing the toughest job markets in a generation,” Charlotte Davies, a careers expert at LinkedIn, told Yahoo Finance UK.

“Our data has found that there are currently three times as many people applying for every role compared to this time last year.”

But there are pockets of growth in the job markets, and analysts say developments in the year ahead —from current COVID-19 restrictions to vaccine advances — could mean robust hiring in particular sectors.

Business surveys show rising optimism among many firms despite COVID-19 and Brexit, with confidence among manufacturers even reaching a six-year high in December.

“Employers will always want to create new jobs where they can, and as the vaccine rollout continues and health restrictions ease, we should start to see that happening more,” said Neil Carberry, chief executive of the Recruitment & Employment Confederation, earlier this month.

Surging stocks in some of the worst-hit industries since vaccine breakthroughs in early November also indicate investors’ confidence in their fortunes — which jobseekers could reasonably hope translates eventually into new job markets.

“If that’s the case, it could greatly help limit the rise in unemployment – these sectors are labour-intensive so a rebound in activity should translate to robust hiring,” he added.

Hiring as the economy still struggles with COVID-19

While the news alone of a looming vaccine may give some employers more confidence in longer-term hiring, the recent rise in infections and restrictions in London and other areas underline the much bleaker short-term picture.

Britain’s rollout may have begun rapidly, but government ministers have repeatedly emphasised the wider rollout will take some time.

“COVID will run for a while,” said Chris Gray, director of recruitment giant ManpowerGroup in the UK.

He told Yahoo Finance UK that hiring in certain sectors would continue to reflect the “ebbs and flows of the COVID journey.”

ManpowerGroup UK saw some manufacturing clients ramp up hiring to produce ventilators and PPE earlier this year, while others are now looking to expand to produce rapid testing equipment. 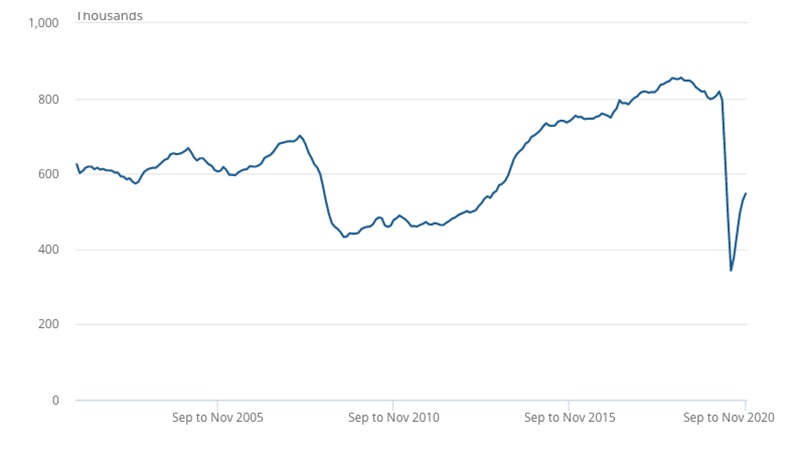 “Who knows what vaccination logistics will bring,” added Gray. He said transporting and administering vaccines could also mean new jobs in what’s been called the “biggest vaccine programme in history.”

Logistics, transport and public sector clients have also been “extremely busy” hiring in 2020, according to Gray.

Supermarket, e-commerce and delivery firms like Tesco, Amazon, and Domino’s all announced thousands of new jobs in 2020, and demand looks set to remain strong while millions of households remain at home.

There seems little reason to expect strong recruitment in warehouse, delivery, grocery and health and care roles to tail off while the pandemic continues to rage.

Yet there also seems little reason to expect lay-offs in ailing sectors to stop or overall vacancies to pick up significantly any time soon. Business leaders have warned renewed restrictions without more support will only exacerbate already-rising unemployment, and that more firms will collapse before conditions improve.

In November the Office for Budget Responsibility (OBR) predicted a “significant rise” in joblessness to come, warning it is likely to hit 2.6 million in the second quarter of next year.

‘Is the Pret economy going to come back?’

One of the biggest questions for jobseekers, firms, economists and policymakers alike is how far COVID-induced changes are here to stay, even if mass vaccine rollouts and testing allowed restrictions to be eased significantly next year.

“Is the Pret economy going to come back at all or at a much reduced level, and what does it create in its wake?” asked Gray.

Kennedy agreed. “Some of the changes we’ve seen in the job markets during the pandemic may prove to be longer-lasting.”

He expects demand for online retail to remain much higher than before the pandemic, boosting recruitment of warehouse staff, drivers, logistics professionals and other workers supporting the “stay-at-home economy.”

While business surveys show an increasing demand for temporary rather than permanent staff among cautious employers, it is notable that Tesco’s 16,000 new roles announced in August and Amazon’s 7,000 in September were for permanent hires.

The Indeed economist added: “To the extent that households have got used to doing more of their shopping online and choose to continue in this vein, these roles are likely to remain in demand.”

‘Is the Pret economy going to come back?’

Various tech-related skills and roles are also expected to remain in high demand both throughout and beyond the pandemic.

Davies noted software and IT services had seen the third highest hiring on LinkedIn in 2020, behind manufacturing and healthcare. The careers and social media site recently compiled a list of 10 of the most in-demand jobs for jobseekers thinking about their long-term futures and pay prospects, and technology featured highly.

The research, with Microsoft and GitHub, looked at not only current hiring but also areas with steady growth over the past four years, “livable” wages and skills that job-hunters can at least partially teach themselves online.

Software developers, IT administrators and help desk staff, digital marketers, data analysts and graphic designers were all in the list.

He also noted employers’ continued and in some cases accelerated focus on artificial intelligence, robotics, automation and cloud computing since COVID-19 hit.

Cybersecurity is another potential growth area. “As people work more from home, organisations become a bit more concerned about how they manage their infrastructure.”

Financial analysts were another role highlighted in LinkedIn’s top 10. A recent ManpowerGroup survey also found financial and business services firms were the only major sector predicting they would boost overall headcount in the year ahead.

If a rebound in hospitality, retail, travel, leisure, entertainment and other hard-hit sectors is much slower or weaker than widely hoped, experts say job-hunters from such job markets may face continued difficult choices to make ends meet.

Gray said he hoped such workers would eventually find similar or better roles in the future, but said workers had to be flexible, curious and seek to learn new skills in the short-term.

“There are jobs out there if you’re prepared to compromise a little bit,” he said. He highlighted IT contractors he had seen become gardeners, sales worker become driving instructors, and engineers become delivery drivers.

Davies added: “If you’re looking for a new role, you may need to broaden your horizons or even learn new skills, but this could be an opportunity to move into an industry you’ve never considered before and find a job you love.”

Many skills unemployed workers in hard-hit sectors have remain in high demand, even if not within their industries.

While tech skills dominated LinkedIn’s jobs list, “many other roles are actually far more reliant on soft skills,” she said.

She noted the most in-demand role of all was for customer assistants, “where excellent communication and organisational skills will be far more important.”

Gray agreed. “There are some [jobs] where you can’t get away from needing people to go and interact with people.”

COVID-induced changes such as more remote working may also make some jobs more attractive to more applicants. “Contact centre roles – there’s definitely a shift to working from home, and it opens up a different talent pool.”

The remote working option could make such jobs easier for some disabled applicants, part-time workers or those providing care.

And while the current jobs market is a far cry from the near-record employment seen a year ago, experts emphasise there are still roles available in many areas.

Davies said LinkedIn figures in November suggested three people a minute were getting hired on its site alone.“The goods news is that we can see that there are plenty of companies that are hiring.”